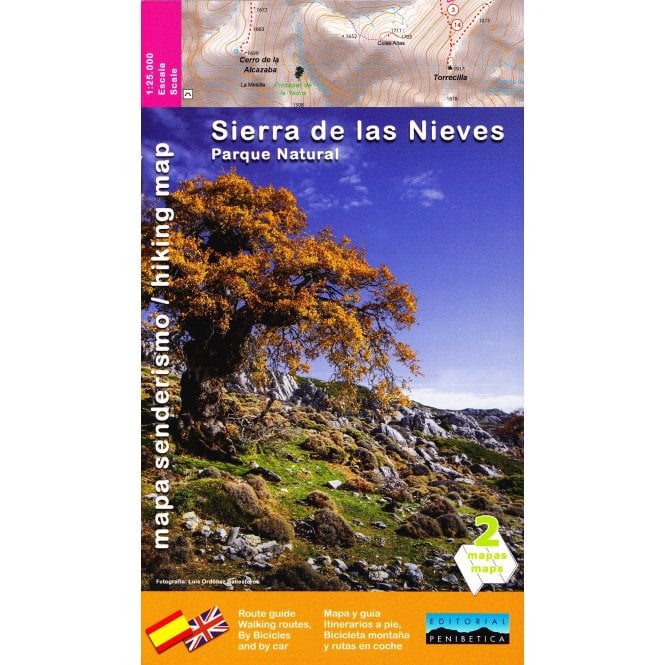 This is two topographic walking map set with a guide booklet of the Sierra de las Nieves National Park at a scale of 1:25,000.

Sierra de las Nieves is bounded to the south by the western Costa del Sol, to the east by the Guadalhorce Valley, to the west by the Sierra of Ronda and to the north by the district of Guadalteba.

Apart from a few villages, which form a rural mountain community, this isolated area is largely uninhabited, and has seen very little human influence or activity, such as agricultural cultivation. For this reason, it has an unusually rich variety of indigenous flora (pine, fir, ash, chestnut, wild olive and oak trees, as well as juniper) and fauna, including mountain goat and muflon. As the name suggests, the park is sometimes snow-covered in winter.

The guide booklet, in Spanish and English, includes a description of general features of the Sierra de las Nieves as well as a guide to the different parts of the Parque, the recreation areas and the camping sites.

The guide provides a number of suggested walking itineraries including several circular routes.  There are also several cycling and driving itineraries providing access to the Parque for all users.  There is also a small list of useful telephone numbers.  Walking and cycling itineraries are marked on the maps as are other paths and any long distance GR routes which pass through the Parque.

While the guide booklet is only in Spanish and English, the legend is also in German and French and includes symbols for climbing and abseiling areas as well as other useful tourist information.