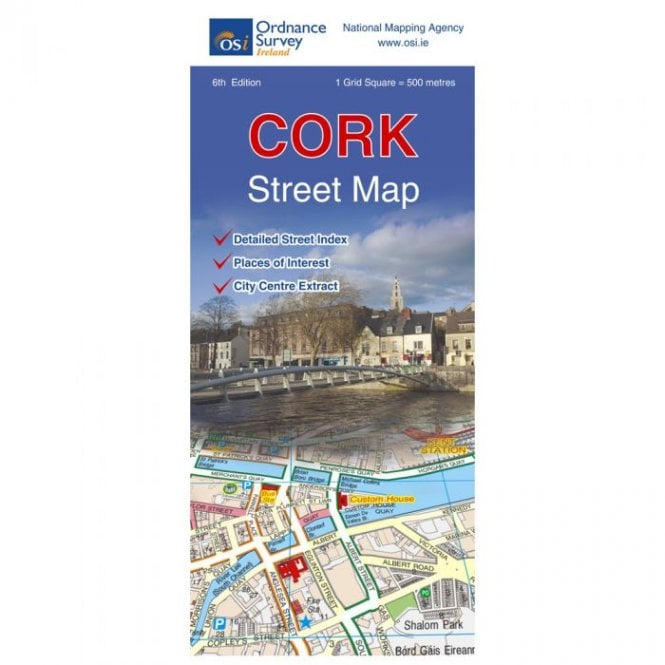 The map covers Mount Desert Wood in the west of the city to Lough Mahon in the east and from Kilcully in the north down to Cork Airport in the south of the city. The main access routes to the city are shown and include the M8 and the Dunkettle Interchange along with the Jack Lynch Tunnel, N20, N27, N40, R614, R600 and R610. The city centre is shown in a detailed insert at a scale of 1:10,000. There is also an alphabetical index of streets, a list of hospitals, churches and places of general public interest, and a List of Streets not named on the map but shown as small numbers. The railway line is marked along with Kent Station in the city. Part of this railway is underground on the approach to Kent station. Cork Airport in the south of the city is shown.

The River Lee, North Channel and South Channel, run through the city and is joined by the River Glashaboy, River Bride, River Tramore and the Douglas River. Goat Island, Hop Island, Cork Lough and Lough Mahon feature on the map.

Cork city is very well served with tourist attractions. Here is a small taste of what is available in the city.

University College Cork, UCC, on the banks of the River Lee, established in 1845. The limestone buildings were inspired by the style of the middle ages.

In Cork Jail, visitors are invited to step back in time to experience the 19th century penitentiary as it was at the time.

Numerous churches can be visited. Among them is St. Annes Church in Shandon with its famous clock and Shandon Bells. It is one of the oldest churches in the city, and you can also enjoy 360° views from the clock tower.

The ever-popular English Market, an enclosed market selling fresh local produce, is popular with local residents and visitors alike. After shopping, there is space to relax and enjoy the local atmosphere in any one of the restaurants in the market.

The Crawford Art Gallery is the regional art museum for Munster.

Blackrock Castle observatory; The Space for Science is a fun place to learn about the universe and ever popular with children and adults alike. The castle was built in the sixteenth century and is on the banks of the River Lee.

Numerous sports grounds are dotted throughout the city, including Páirc Uí Chaoimh, rebuilt in 2017.