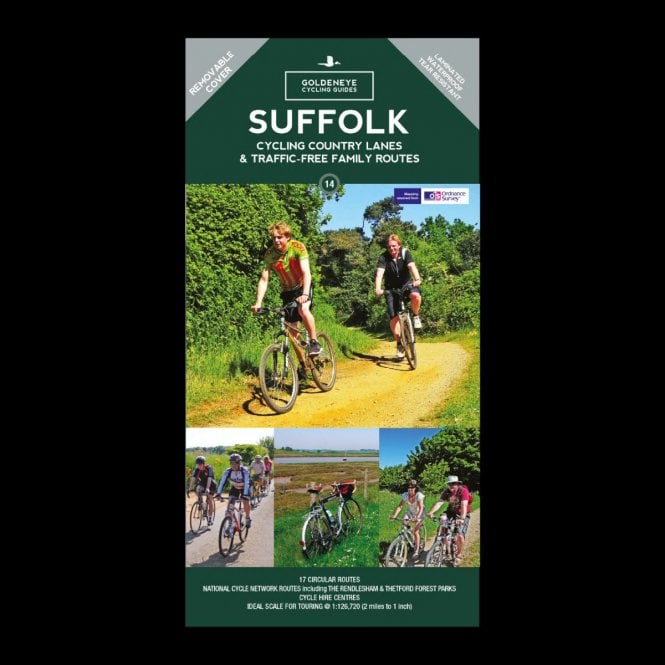 To be confronted with the variety and complexity of the cycling routes, trails and paths in Suffolk can be a bewildering experience.  For it appears that the Suffolk County Council and the three District Councils are all trying hard to promote their areas. This is indeed encouraging for the growth of cycling, but it can be confusing.  Our purpose is to provide clear, easy to use and easy to follow, cycling maps, and to illustrate these in a comprehensive form.

Suffolk must be one of the most charming of counties to explore by bicycle. When Al Churcher delivered his routes to us at Goldeneye we couldn’t keep him quiet, such was his enthusiasm and wonder at Suffolk’s country lanes and byways. He has cycled all over the UK, Canada, Mallorca, New Zealand and Sicily, but Suffolk remained a firm favourite.

The inland scenery is not spectacular for the county’s main glory lies with its attractive villages; the local architecture jealously preserved from modern depredation. There is an abundance of churches, ranging from the magnificence of Lavenham and Long Melford to more modest churches, but almost all have a unique feature to be proud of. The quiet countryside has been immortalised in the paintings of John Constable who lived most of his life in the Stour Valley on the Essex  borders.

We hope that by following these routes your enjoyment and knowledge of this corner of England will increase one hundredfold. The purists may prefer to follow their own course. They will, we hope, enjoy and appreciate the clarity of our mapping

NCN Route 1. Hull to Harwich. A 370-mile route, passing Cathedral cities, towns and villages through pastoral countryside.  This is the main north to south route through Suffolk, forming part of the Fakenham to Harwich cycle route. The route enters Suffolk from Essex at Stratford St Mary and passes through Hadleigh, around the north-west side of Ipswich, through Woodbridge and Halesworth, before entering Norfolk at Beccles.

NCN Route 13. This crosses Suffolk on a South to North axis via Sudbury to the pretty villages of Long Melford and Lavenham, to the market town of  Bury St Edmunds, up to Thetford, and on through the Breckland landscape to Fakenham in Norfolk.

NCN Route 51. This route forms part of the Oxford to Felixstowe Cycle Route. In Suffolk the route takes you from pebbled beaches to country parks, and from urban docks, to rural lanes. Twenty five percent is off-road. It enters Suffolk from Cambridgeshire, and crosses west to east, connecting Newmarket with Bury St Edmunds, Stowmarket, Ipswich and Felixstowe

Regional Route/NCN 30. Known as the “Two Rivers Cycle Route” which runs along the Norfolk/Suffolk border from Lowestoft and Thetford, via Beccles and Diss.

Regional Route 41 (Suffolk Coastal Cycle Route). This route combines with NCN Route 1 to form an 88-mile circular route. Starting north of Felixstowe travelling through Orford (via the Butley Ferry), Blaxhall and Bruisyard, then south to Woodbridge returning to Felixstowe via Waldringfield. This circular route is set within the Suffolk Coast and Heaths Area of Outstanding Natural Beauty. Not illustrated on our map with RR41 to avoid confusion. But, follow NCN1 signs on this map.

1. Alton Water Circuit.  An 8.5-mile circuit. There are two routes available, the easier (A) and more challenging (B). Café/Visitor Centre/Cycle Hire. (J10)

4. Peddar’s Way. A challenging 46-mile route, the origin whose name is obscure, links Knettishall Heath near Thetfordwith the coast at Holme. For the most part it follows the old Roman road built to restrain the rebellious Iceni tribe. Open to cyclists, walkers and horse riders.  (E1)

5. Rendlesham Cycle Trail. Two family trails start from the Forest Centre. The shorter trail, the Tang Trail, is about 6-miles. The longer, the F.I.D.O. Trail is 10-miles. The tracks are made up of gravel, grass, sand and tarmac.  Nearby, in Tunstall Forest, there’s a popular Mountain Bike area. (L/M8)