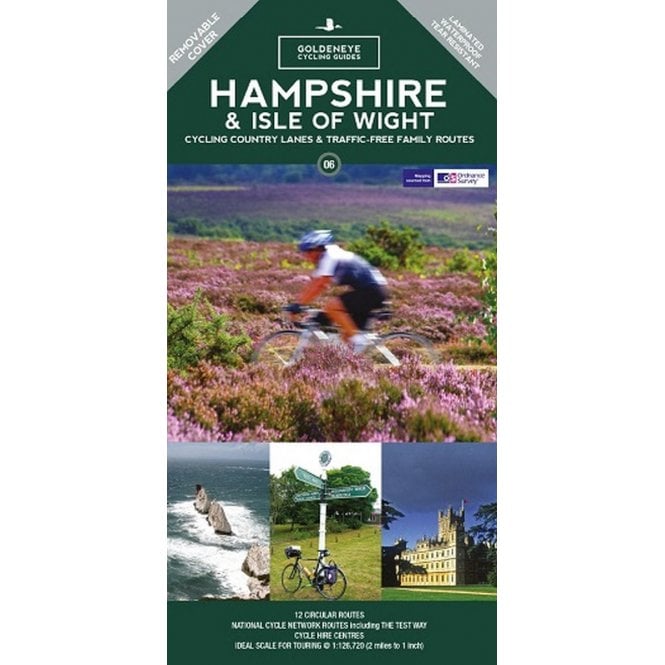 I was lucky enough to be brought up in a small village between Winchester and Southampton, and though I moved north in my twenties, Hampshire has always been to me a land of tree-tunnelled sunken lanes, thatched cottages with gardens full of flowers and hazel copses. Not forgetting the clear chalk streams and rivers where we poached trout and salmon and swam in the pools – always keeping one eye out for the water bailiffs. Despite the ever expanding urbanisation of the area, inland Hampshire remains much as it always was, with little obvious change to its villages and their network of single-track lanes, and you can still ride all day through these lanes and hardly encounter a car.

As the chalk of the South Downs has lost much of its height by the time it reaches Hampshire, most of the riding is on the easy side, with few climbs that could be classed as more than moderate – quite similar to that of Suffolk.

Coastal urban sprawl and associated traffic density have thankfully not reached the Isle of Wight – particularly the western half of the island – which really has changed very little since the 60’s. These two routes pass through a wide variety of scenery, with some beautiful coastal sections – the views of the Needles from the Old Battery above Alum Bay, and the cliff-top road running east from Freshwater are unforgettable. (Don’t be put off by the fact that this is shown as an A road as most rural B roads carry much more traffic – even in August). These two routes also have the advantage of being easily & cheaply accessible by ferry from Lymington and Southampton.  Just buy a foot-passenger ticket and your bike travels free.

The New Forest is, understandably one of the most popular tourist destinations in Britain and traffic jams on the more major roads are a common occurrence. But on a bike it’s still easy to escape the crowds, and the Forestry Commission has done excellent work in developing and signing a comprehensive network of cycle routes. Best undertaken from one or two of the cycle hire centres listed below. Happy Cycling, Al Churcher

This is a linked series of traffic-free paths and traffic-calmed roads being developed across the UK linking town centres and the countryside. The so-named route numbers do not always join up as the overall planned route has not yet been completed and sometimes they overlap with other routes. sustrans.org.uk

1. NCN 2. Eventually, NCN 2 will extend from Dover in Kent to St Austell in Cornwall. At the time of publication only the route from Dover to Brighton is completed. The Hampshire section between Emsworth and Christchurch is only partially complete.

3. NCN 22. Will connect Banstead, Surrey and Brockenhurst, Hampshire via Dorking, Guildford, Farnham, Petersfield, Havant, Portsmouth and the Isle of Wight between Ryde and Yarmouth.

4. NCN 23. Will run south from Reading to Southampton via Basingstoke, Alresford, Winchester and Eastleigh with a spur to Alton. The route continues on the Isle of Wight from Cowes and Sandown via Newport with a ferry running between Southampton and Cowes. All of the route between Cowes and Sandown via Newport on the Isle of Wight is open and signed.

5. NCN 24. Will run from Bath through Radstock and Frome in Somerset, then Warminster and Salisbury to join with NCN 23 at Eastleigh in Hampshire. The route is open between Alderbury, Wiltshire and Mottisfont Abbey, Hampshire, mainly on quiet roads, and continues from just outside of Romsey to Eastleigh mainly on traffic-free paths.

6. NCN 45. Will connect Salisbury, Wiltshire, with Chester in Cheshire, via Swindon, Cirencester, Gloucester, Worcester and Whitchurch. Between Saul and Gloucester the route follows NCN 41. Some sections are still awaiting completion.

1. Chawton Park Woods (Alton Off-Road Cycle Trail).  Circular, waymarked route starting from the car park at Chawton Park Woods.    It is 10 miles (7 off-road)/12 km. For younger children use the linear route running parallel with the Mid-Hants Railway, through the wood to the edge of Chawton, visit Jane Austen’s house, and return the same way. (J5)

4. Meon Valley Trail.  This beautiful 10-mile trail encompasses the disused railway line from Knowle to West Meon. Open to cyclists, walkers and horse-riders.  It is safe and flat for families. Start from Station Road, Wickham.  (G9-H7)

5. New Forest: There are plenty of waymarked cycle routes criss-crossing the New Forest. Most start from Brockenhurst although there are a number of routes starting in the north with more rugged terrain and panoramic views. We recommend you start from one of the local bike hire centres as they will provide you with route maps. Distances vary from 3 miles to 24 miles (5km to 39km). (C10)

6. Test Way: Running between Stonymarsh (car park) and Stockbridge along the eastern bank of the River Test, this disused railway track is ideal for families as it is flat and completely traffic-free. Stockbridge Common Nature Reserve is on the route. An easy 10 miles/16km. (D4)