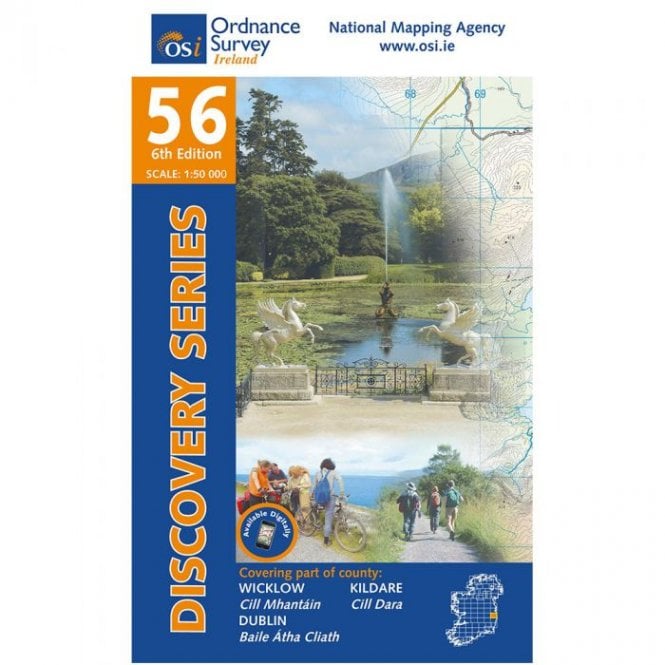 This map is situated in Co. Wicklow, Co. Dublin and Co. Kildare. Parts of this sheet are covered by the OSi Adventure Series - Wicklow Mountains Sheets. It is also available as a weatherproof product.

The M11 Motorway adjoins the N11 National Primary Road, running vertically along this map. The majority of the map is served by regional and third class roads.

The primary urban zones featured on this map include Bray, Greystones, Wicklow Town, Rathnew and Blessington. A railway line runs along the east coast of this map, with stations at Bray and Wicklow Town.

The Spink and The Great Sugar Loaf also feature on this map.St. Georges Channel lies to the east of the map, with prominent locations Bray Head and Wicklow Head featuring.

The River Liffey, Kings River, Dargle River, River Slaney, Avonbeg River, Glenmacnass River, Avonmore River and the Vartry River are all noticeable throughout this map. The Sally Gap features on this map.

Highlights in the area include Glendalough Monastic Site, Glenmacnass Waterfall and Roundwood, which is one of the highest villages in Ireland.

There are a number of trails scattered around this map. These include Bray to Greystones Cliff Walk, Maulin Trail, The Wicklow Way, St. Kevins Way Valleymount Spur, the Seamus Heaney Walk and the Clara Vale Trails. This map is host to the Source of the River Liffey.