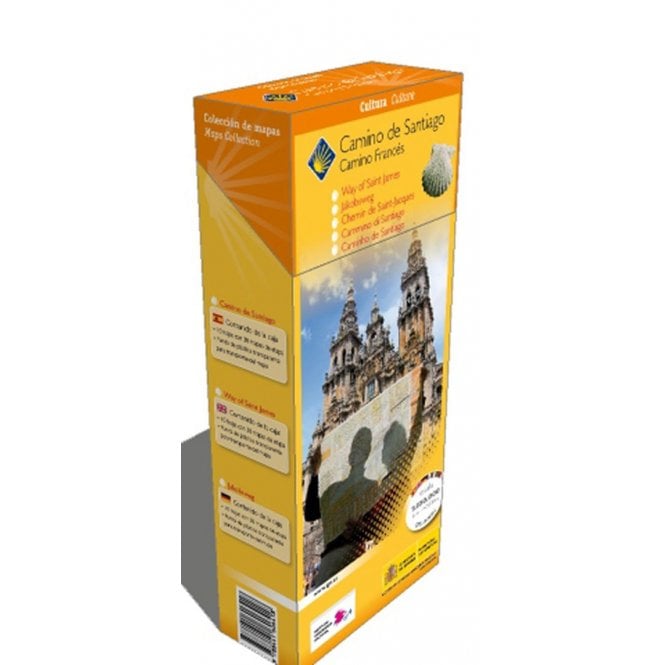 The whole of Way of St James to Santiago de Compostela in a set of 11 maps.

The legend is in Spanish, German, Italian, English, French and Portuguese.

The 10 main maps are double-sided and consist of four panels with topographic mapping of the area through which the route passes. Shading and colouring/graphics to show several different types of land cover (forests, meadows, olive groves, vineyards, etc.) with the route(s) being prominently shown. The maps have a 1km UTM grid, plus margin ticks for latitude and longitude. Contours are provided at 20metre intervals and spot heights are given based on the  average level of the Mediterranean Sea at Alicante.

The path of the Camino is marked on the maps using the traditional scallop shell symbol which is found on way markers and churches along the route.

Each main map includes four small cross sections matching the four panels to give indication of the topography the pilgrim will walk on that stage.  There are also four small scale overviews, one of each panel giving distances between various points as well as the facilities available: hostels, accommodation, places to eat, pharmacies, hospitals/health care providers, banks, tourist information points and, in this modern era, places with internet access!  Train stations and Bus Stations are also shown as are bicycle repair shops.

If you are planning to do the Camino in one go, or over several trips, this box set is invaluable.