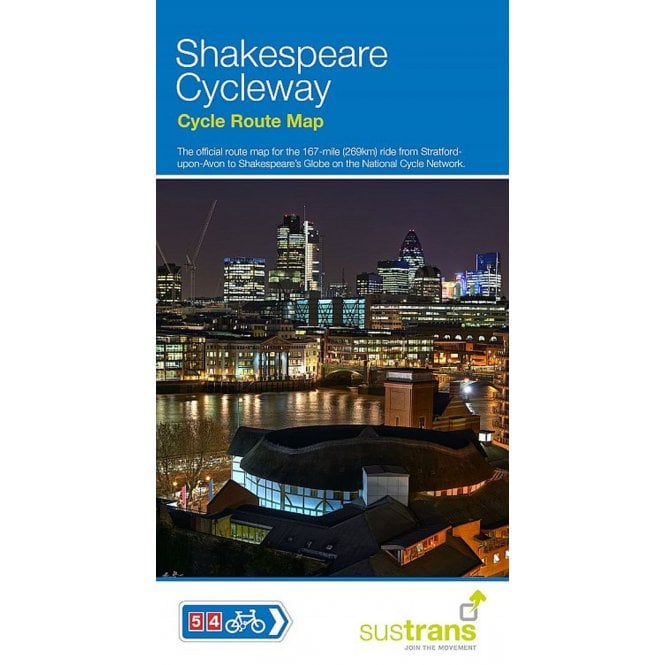 The official map for the 167-mile route from Stratford-upon-Avon to Shakespeare's Globe Theatre.

This cycle ride connects two locations whose history is forever entwined with the life of the world’s most famous playwright: Stratford-upon-Avon is where William Shakespeare was born and saw out his last years, and Bankside was home to his magnificent Globe Theatre.

It also links two of England’s greatest rivers and theatres: Starting at the Royal Shakespeare Theatre on the banks of the Avon in Stratford, it ends on the south bank of the Thames in central London at the magical timber-framed and thatched “wooden O” of Shakespeare’s Globe.

Stratford boasts Shakespeare’s birthplace where you can visit the very house where he was born and grew up, not to mention many other Elizabethan buildings that would have been familiar to the Bard himself. You can even visit his final resting place at nearby Holy Trinity Church.

Shakespeare’s Globe is a 1997 replica of the Globe Theatre which was home to Shakespeare’s troop of actors (the Lord Chamberlain’s Men) and is a stone’s throw from the site of the original building demolished in 1644. The theatre complex also houses the Sam Wanamaker Playhouse, a candle-lit reproduction of a typical Jacobean theatre.

Along the way this ride encompasses some of the finest, most quintessential English countryside which “this sceptred isle” has to offer. It also combines parts of two long-distance cycle routes: The West Midlands Cycle Route (Derby to Oxford) and the Thames Valley Cycle Route (Oxford to London), both of which in turn form parts of even longer-distance rides: NCN5 runs from Anglesey to Reading while NCN4 stretches all the way from Pembrokeshire to London.

Routes covered by this map: