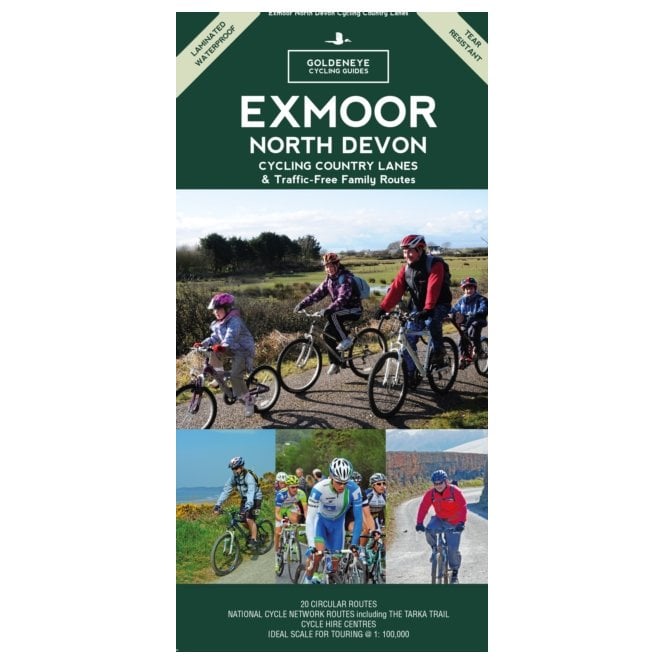 This Map covers the Exmoor National Park and North Devon; an area with a wide variety of coastal and inland scenery, much historic, architectural and leisure interests. The Exmoor National Park is largely in Somerset, with a small portion lying in Devon. At times the climate is harsh with mist, cloud and rain, and is reminiscent of Scotland. When the skies clear, the wild, wide beauty is unsurpassed. The landscape is undulating, full of rolling hills, marshland, bracken, heather and gorse, and divided by swift flowing streams which cut through the steep-sided valleys, known as combes. The rolling moorland provides splendid views seawards across the Bristol Channel to Wales. In places the coast is crowned with high cliffs falling precipitously to the sea.  The Exmoor sheep and wild ponies are seen everywhere, as can be found buzzard and raven. The roaming red deer is rarely seen close to, they feed at night and by day lie hidden in the woods or bracken.

North Devon is a rural landscape of small villages, rich pastures, secluded coves and long sandy beaches popular with the surfing fraternity. The two ancient ports of Barnstaple and Bideford have grown beside the wide estuary of the Taw and Torridge rivers. Stretching southwards from these ports is the gentle pastoral countryside known as 'The Land of the Two Rivers' so vividly brought to life in the works of Henry Williamson. The warm equable climate, together with the nature of the countryside provides excellent recreational opportunities, particularly for the cyclist and mountain biker, walker, horseman, fisherman and surfer. The area also contains a sufficient variety of cultural and urban interests to satisfy all tastes.

So, if you seek quiet country lanes, river valleys and routes along flat ridges affording spectacular sea views that swoop down to picturesque villages with tearooms awash with clotted cream, and hospitable country inns. Look no more. It is all here.   Happy Cycling, Al Churcher

This comprises three Regional Routes (RR) and is bounded by the National Cycle Network Route (NCN) 3 to the south, and the NCN 27 to the west.

1. The Tarka Cycle Trail (part of NCN 3 & 27) runs on tarmac from Braunton – Barnstaple, then beside the Taw Estuary to Instow, up beside the River Torridge to the Puffing Billy pub below Torrington. Crossing the river to Watergate Bridge, the trails joins a bridlepath and is cycleable on a hybrid, touring and folding bike all the way to Meeth. Excellent café at Yard - Railway summit (F8). Distance 32 miles/51kms - all traffic-free. (F4)

4. Willand to Tiverton Parkway. With link to NCN 3, this is a flat, traffic-free path. Also links up with the Grand Western Canal at Sampford Peverell. Distance 3 miles/5kms. (R8)